Late March and April offer a great chance to cruise the Northern Rhine and some of its tributaries.  These cruises are known as Tulip Time cruises since they focus on the blooming of the tulips in the Netherlands.  So, let’s learn about these typical 7 night cruises that visit Holland (a nickname for the Netherlands) and Belgium. The Low Countries of Netherlands and Belgium (they are called that because about half of the land of these two countries are below sea level) are a really interesting part of Europe and our cruise was a great way to learn more about two of three Benelux countries (Luxembourg is the third)  So, here goes!.

In 2012 we took a Tulip Time Cruise on AmaWaterways.  This trip is designed to give you a really good look at the Netherlands and Belgium.  It is only offered in the spring time, when the tulips bloom.  The route is a loop around the Dutch and Belgium waterways that starts and ends in Amsterdam.  The stops have changed slightly since our cruise in the Netherlands, but they key ports of Arnhem, Antwerp, Ghent, the visit to the Kinderdijk windmills, and the highlight of the cruise for most, Keukenhof gardens, remain.  I was amazed at how little I really knew about this region prior to this trip, and it inspired us to return several times to both countries.  Here is a photo I took while on the Amsterdam canal boat tour:

If you have ever seen the film. “A Bridge Too Far”, you will understand the appeal of this port.  In a major operation of WW II, Operation Market Garden, the British tried to capture a bridge over the lower Rhine at Arnhem by an airborne assault and then link up with armored forces.  In September 1944, 600 soldiers held the bridge against overwhelming odds for 4 days but the planned link up failed.  In honor of this gallant effort, the bridge is named for the commander, LTC John Frost .  There is a really good airborne museum we got to visit on this cruise—as a retired Army officer, I found it one of the best military museums I have ever visited—the combination of audio-visual displays, photos and dioramas are excellent.  Not to be lost on this visit, is the cost of war and the visit we made to  Oosterbeek Military Cemetery really helps us remember the sacrifice of others.  Here are some pictures: 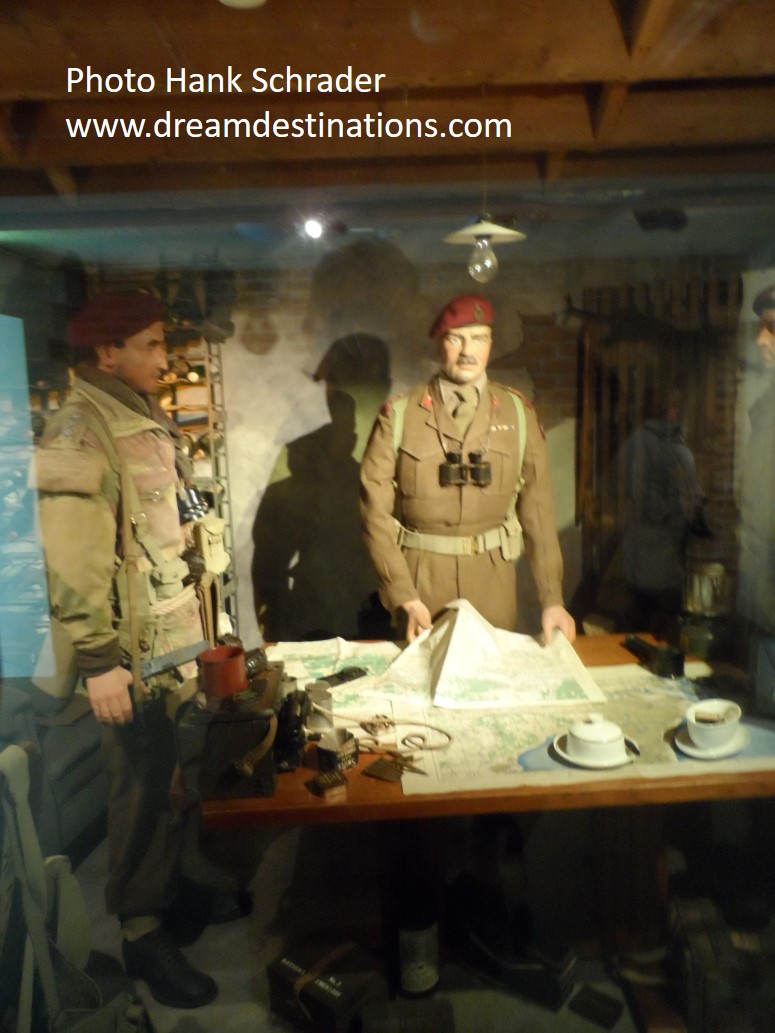 There is an alternate tour to the Kroller Muller Museum, which has the second largest collection of Van Gogh paintings in the world, or you could join a guided bike tour of Arnhem.

This was a fun stop—the old town is great.  You will dock by Antwerp castle and visit the old market place (Grote Market) with the old guild houses, the impressive town hall and the Barbo fountain (depicts a Roman soldier, Barbo, who slew a giant terrorizing Antwerp).  It is an easy walk on your own or take the guided tour.  An alternative is a visit to the Rubens House, the former home of the famous Flemish painter.  Here are some pictures: 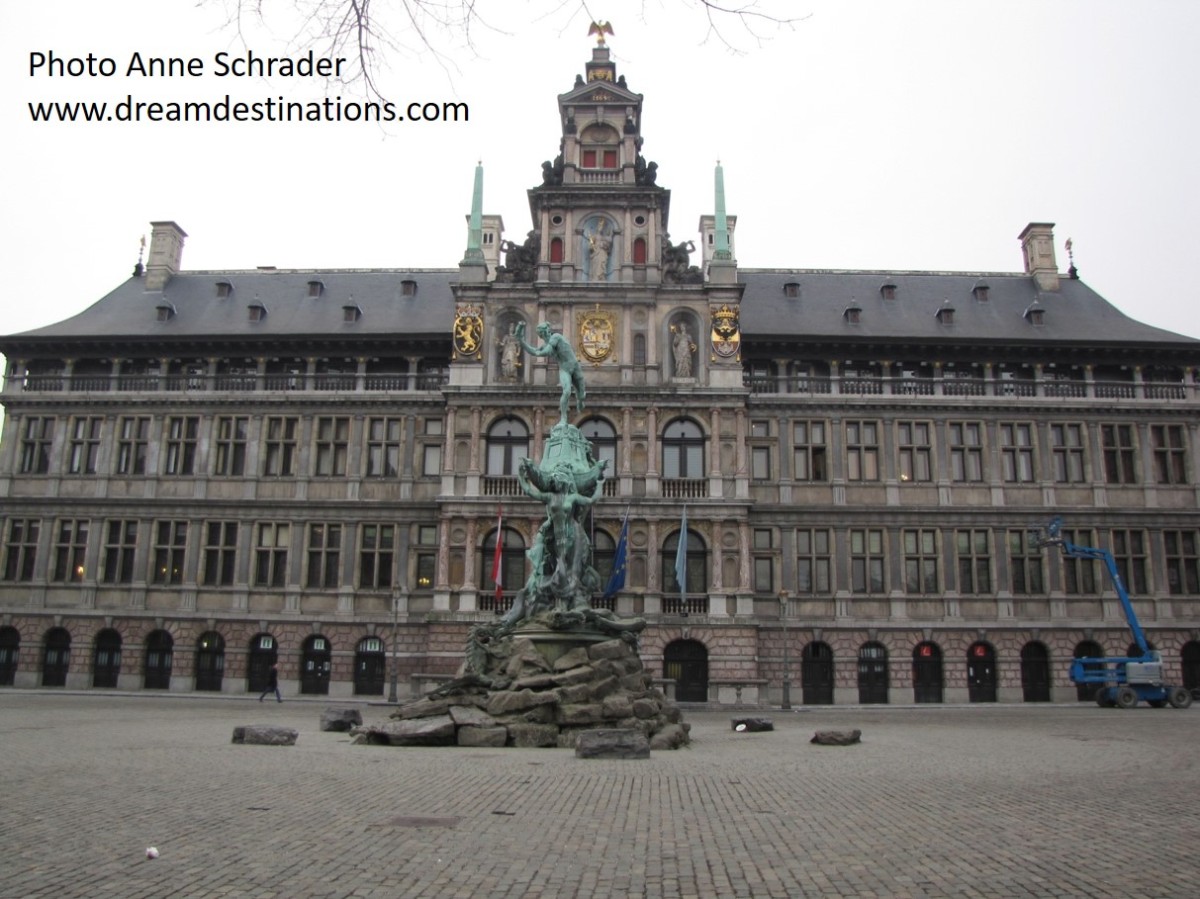 In the afternoon, you can take a waffle and chocolate tasting or a guided bike ride.  We picked the tasting and it was awesome!  Here are some photos:

World Famous Belgium Waffles–they tasted as good as they look! 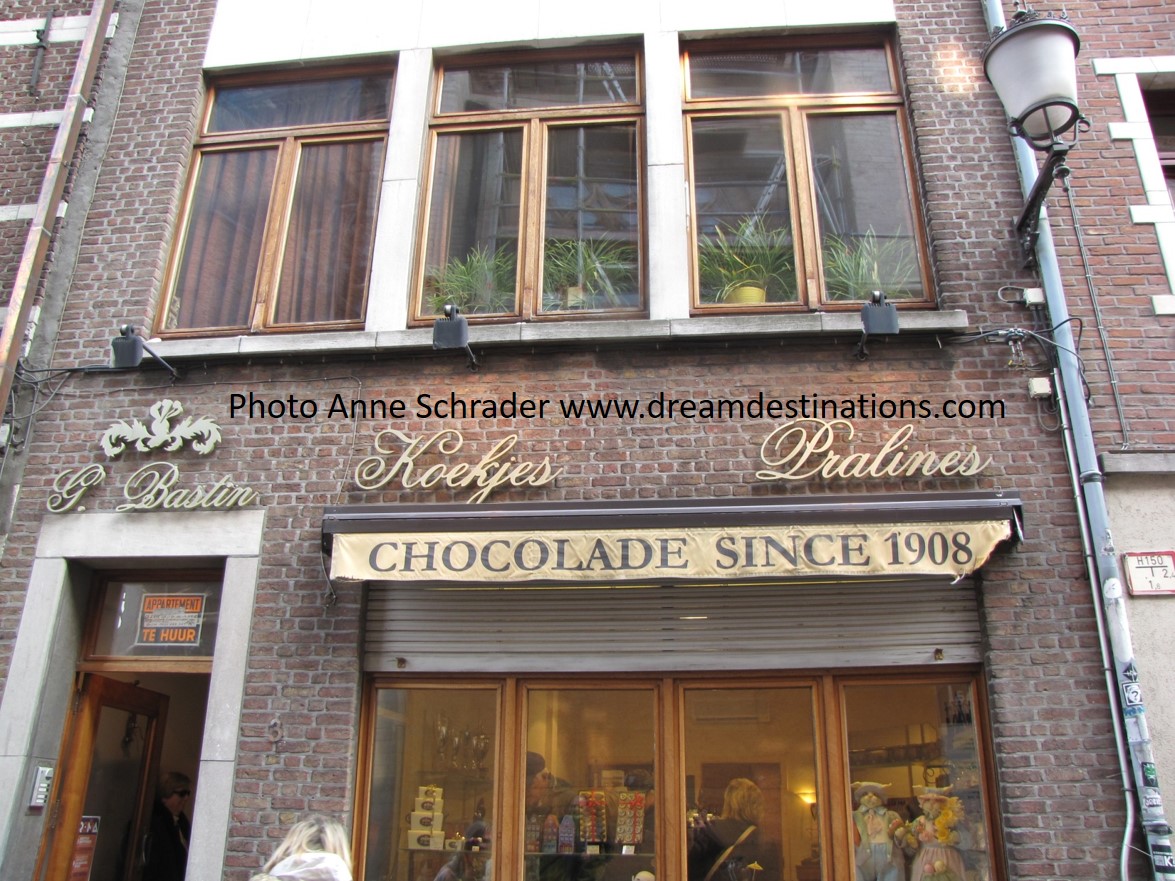 The Chocolate Shop we stopped in to sample some Belgium Chocolate

Chocolate is a true art form in Antwerp, Belgium

You have 3 choices for this port stop.  First, a full day tour of Brugge (Anne’s favorite Europe City); or a guided tour of Ghent, featuring the Belfry Hall, the Koorniei and the Grasiei (part of the medieval port) and the castle of the counts; or a guided bike tour.  Since we were going to spend 3 days in Brugge after our cruise, we choose the guided tour of Ghent.  Those folks who went to Brugge raved about it, so judged on their response, it is an excellent option.  Ghent is a great place to visit, and the medieval port area was my favorite—just so scenic!  Here are some photos:

The medieval port area of Ghent

Our cruise did not include Rotterdam or stop in Schoonhoven, but I got to visit the windmills at Kinderljk.  This is an UNESCO World Heritage site consisting of 19 windmills built to drain the water from the reclaimed lands (polders).  They were built around 1740 and are an impressive engineering feat.  You can actually go inside some of the windmills, see them operate and see what life was like for a family to live and operate the windmill.  They are huge.  Here are some photos:

The short bus ride from Amsterdam to the world famous 70 acre gardens of Keukenhof was the highlight of the cruise for Anne.  These gardens are the best display of tulips in the world and feature outside flower beds and indoor displays.  During our visit, the tulips had not bloomed yet outside in many of the flower beds, but the indoor displays were so awesome, we hardly noticed the absence of the outside flowers.  Here are some beautiful photos:

This was a fun cruise and we would do it again.  I had no idea there was so much to see in these two countries.  We hope this will inspire you to give us a call (Hank 713-397-0188) or send me an email (hschrader@dreamdestinations.com) so we can help you visit Europe on a river cruise and help you:  Savor life . . . make memories . . . visit Dream Destinations!  Your journey begins here!